E-Cigarettes: The New Craze That Keeps You Hooked on Nicotine – Laura Chapman

The e-cigarette took the world by storm in 2007 when it was introduced as a revolutionary new way to help smokers quit smoking. For the first time, makers of the e-cigarette were offering smokers the chance to smoke without inhaling many of the nasties that are present in traditional cigarettes (it may surprise you to know, but arsenic is actually an ingredient). Friends and family who don’t smoke could also be relieved that they wouldn’t be breathing in any second hand smoke. Since the smoking ban, when it was declared illegal to smoke indoors at most establishments, however, some public venues accept their customers smoking an e-cigarette. After all, electronic cigarettes aren’t the real thing and there’s no danger of other people becoming ill from inhaling dangerous fumes or coughing all night from the smoke. At first glance, they seem like a brilliant and socially responsible way to try and quit smoking but the reality is, they are an untested product with a completely unknown safety record and they are getting whole nations of people hooked on nicotine.

One of the biggest problems with e-cigarettes is that because they contain no tobacco they aren’t required to be regulated by the FDA and can be sold like sweets to anyone, without the safety testing that is applied to medication. No one knows what long-term effect they will have on the consumers who use them and more worryingly, as they are freely available to purchase online, anyone can buy them – including children. Stores don’t have to ask a young person for proof of age as they would with regular tobacco or alcohol so in some countries obtaining their ciggies could be as easy as buying a packet of potato chips. It is because of this that the UK has recently banned the sale of e-cigarettes to youth under the age of 18.

Now, rather than just being a smokers aid, they are being procured by non-smokers as a ‘greener’ way to enjoy cigarettes and by children who think they will increase their ‘street credibility’ so that people who would not normally be exposed to nicotine, are, through e-cigarettes. The FDA say that the devices increase nicotine addiction amongst young people and that they may even tempt kids to try conventional cigarettes – the opposite of what they were intended for. Nicotine is extremely addictive and the craze among teens to try it through e-cigarettes has led some to become hooked. Many parents, doctors and anti-cigarette campaigners also assert that the marketing of such products is unethical because they are flavoured in varieties that are naturally appealing to kids, such as strawberry, peach, banana, coconut, vanilla, chocolate and mint. Nicotine delivery devices are intended for adult use, primarily to assist smoking cessation or to reduce the risks of second-hand smoke, so why would they need to taste like candy? 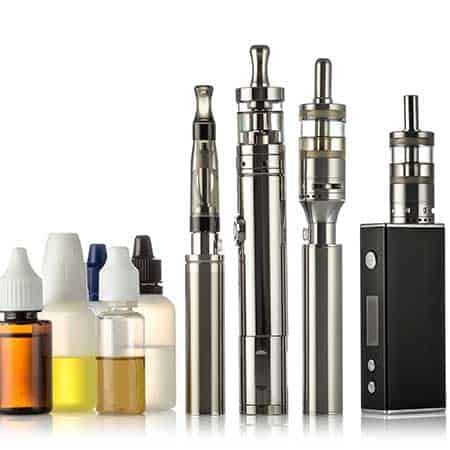 As well as the lack of protection of vulnerable members of society, because the product isn’t classified as a drug, no one has bothered to check whether the ingredients are safe to inhale or if ‘electronically’ smoking even helps you to quit. The jury is still out on how effective electronic nicotine delivery devices actually are and the science is limited. Some studies say that e-cigarettes are as effective as nicotine patches, or better in helping you ditch the habit, but even then, that still only amounts to around a 7% chance of completely quitting. Other research has found that e-cigarette users were significantly less likely to still be abstaining from smoking after a seven month period compared with people who had never tried e-cigarettes. In other words, electronic smoking actually increased their chances of wanting a cigarette and some smokers have found themselves swapping one habit for another and just transferring their addiction to conventional cigarettes onto e-cigarettes.

E-cigarettes have only just begun to be evaluated and have never been subject to any medical trials to establish their safety. In 2009 the FDA’s Division of Pharmaceutical Analysis looked at the ingredients from two brands of e-cigarette and found that some contained carcinogens (cancer causing chemicals), including nitrosamines and one contained diethylene glycol, a toxic chemical used in antifreeze. The main ingredient in e-cigarettes appears to be propylene glycol, a solvent used in a variety of applications including shampoo, toothpastes, mouthwash, food flavourings and medicines. Due to its wide application, it is generally thought of as safe but just because something is used frequently doesn’t make it safe. In fact, no studies have ever been carried out regarding respiratory, cardiovascular, endocrine, metabolic, renal or other effects in humans after inhalation of propylene glycol, so when e-cigarette companies say that inhaling propylene glycol is safe, they have no proof that this is true. The customer is the experiment.

Glycol ethers of different varieties have been found to affect semen quality in men and lower sperm count in male painters and decorators who inhale glycol that is present in paint and DIY products. Men exposed to glycol ethers have a two and a half fold increase in having sperm with poor motility (ability to swim) compared with men who don’t work with the ethers. The method of exposure – breathing it in – is the same way an e-cigarette smoker is exposed to propylene glycol. In addition, sexual lubricants contain propylene glycol and are rumoured to be one of the reasons why so many young couples are infertile today. Researchers know that an hour after applying a vaginal lubricant, sperm motility was reduced by 60-100% and was as effective at disabling sperm as spermicide creams. Surprisingly, the potential implication for infertility problems in e-cigarette smokers hasn’t yet been explored.

Essentially, also advertised as a ‘green’ cigarette, they make smoking seem more desirable while putting people at risk from known and unknown risks in an almost unregulated market. Would you take the chance with your health?

Painting and Decorating May be Harmful to Male Fertility, Bio News. 2nd June 2008

For more information about the Smoke Free Program, fill in the form below

That it’s impossible to become “stuck” in a trance state which is a common misconception. In truth, hypnotised people who experience hypnosis never lose control of their mind or body, and are able to come out of the state as easily as they slipped into it.

If you have questions or would like more information about how we can help you achieve your goals or make the changes you’d like to, please call us on 07 3254 1373, email appointments@brisbanehypnosisclinic.com.au or simply fill in the form below.